My List Of The Most Popular Spanish Names: Origin And Meaning 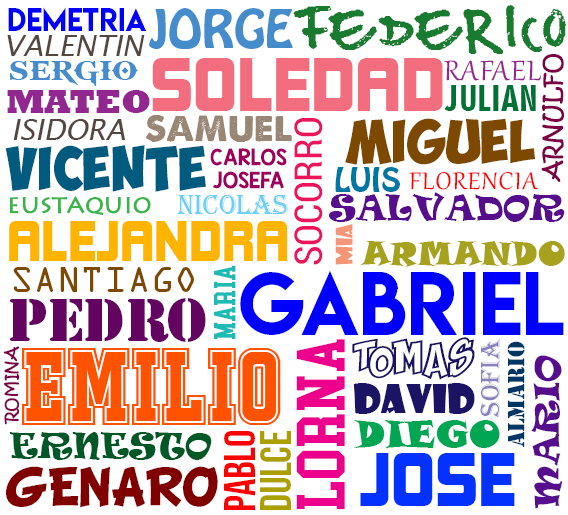 The Spanish naming customs and traditions date long back in history. You can read about the web resources of Spanish Genealogy here. Most of the naming customs in Spain were started to avoid confusion in villages and neighborhoods. The ex suffix used in the names indicated ‘son of’. This custom is a very old custom in the country.

Girls in Spain are often named Maria. It is done to honor Virgin Mary and a name of shrine, place or religious concept is attached as a suffix name to Maria. Girls with names such as Maria de los Angeles (Maria of the Angels), Maria de la Luz(Mary of the light) are often addressed as Angeles and Luz respectively.

Also, it is not uncommon that a boy’s name also includes Maria in it. The name is usually prefixed by a masculine name.

The other popular languages in Spain are Catalan, Basque, and Galician. Basque names are often translated into Spanish or English language.

The Catalan territories also follow the same naming customs as Spanish. The names are seldom translated; however, some minor changes are made in the names while registering them.

Naming a newborn baby can be said to be an adventure in itself. The process is very neatly followed and means a lot to the Spaniards. The name of the newborn baby is decided with a lengthy process. The name must have a thought behind it. Here are some exaples of Spanish names that say a lot about the Spanish naming customs:

Paloma is taken from a Latin word Palumbus which means pigeon or dove. The obvious meaning of this name is peace as dove is the symbol of peace throughout the world.

Dulce originates from the Latin name dulcebella. It is from the middle ages and means sweet.

The name Solana is a spin-off the Spanish word sol which means sun. In popular culture it means a ray of sunshine that arrives in the family after a brief period of grief.

The name Josefa is of the Hebrew origin. It literally means ‘God shall add’ and is a very deep name.

Fernando is a famous name for an adventurer. It translated into bold voyager. It is mostly shortened to Nando.

Some of the most popular Spanish names are as follows: